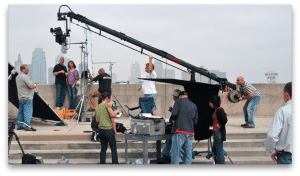 When was the last time you saw a film and felt so moved by a particular scene, that the mere thought of it right now makes you lose all sense of time and space?

Perhaps it was the black and white neorealism of Vittoria De Sica’s heart-rending restaurant scene from the classic Ladri di biciclette (The Bicycle Thief), or perhaps the visually striking, haunting imagery of Andrei Tarkovsky’s Stalker.

It doesn’t matter which film or director, which actor or scene. What truly matters is the riveting effect that a moving image has on your consciousness.

Indeed, this is why filmmakers work tirelessly to ensure every frame has something meaningful to say, each inch of the screen somehow contributing to the grand narrative.

And what better way to enrich the soul of your film than shoot in an authentic location, brought to life by history?

Say, you’ve chosen the perfect location to shoot your film. Maybe it’s just one scene, maybe the entire film is shot on location—the point is, you’re done with the paperwork, been granted permission by local authorities and managed to assemble your entire cast and crew in place.

What could possibly go wrong now?

Without a clear and elaborate strategy to cope with unpredictable weather—let’s just say, a lot!

As with any aspect of filmmaking, going out of your way for pre-production and principal photography can save you an enormous amount of time and resources on post-production. This means taking simple but necessary measure to keep from delaying the production process—starting with these small tips:

If you’re shooting on a budget, you must take greater precautions to protect your equipment and footage. This means investing in a rain cover to shield your camera from rain or snow, always being prepared for the worst.

Rain and electricity don’t work well together, that much we know. But in the absence of natural lighting, you may be forced to delay production (and end up wasting time and money). Act smart and invest in affordable battery-powered lights, from brands such as Yongnuo.

Moisture from rain or snow can cause your camera and expensive gear to malfunction. A simple solution? Silica gel: it costs as low as $7 online and works like magic to suck the moisture out of your camera bag.

When it comes to principal photography, every bit of planning counts.

We are a Kansas City-based video production company, with decades of experience with both in-door and outdoor shooting.

From professional filmmakers to high profile brand names, we have provided production services for them all.